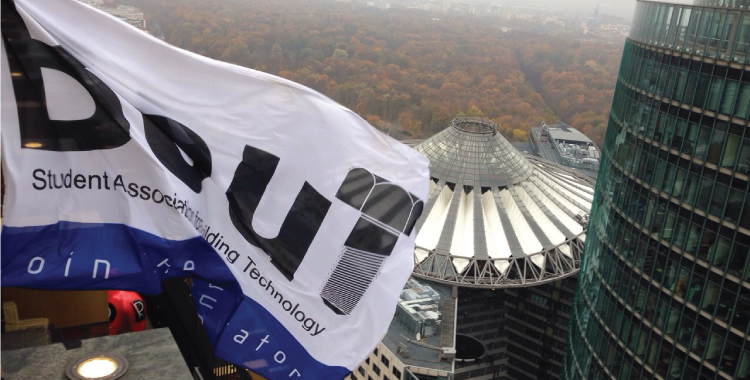 Only a day after the first BT Series it was time for the studytrip to Berlin. It started with an early meeting at Delft Station (almost everyone was there) and at 7.31 the journey started. By train we traveled to Hengelo where we had to transfer to the international train (group was now complete). The first stop was at Autostadt in Wolfsburg, where we had a tour through the park and around 6 ‘o clock we continued our journey to Berlin.The studytrip committee had created an interesting program. On Thursday morning we started with a bicycle tour through the city and after a quick lunch with curry wurst  we visited John Mayer Architects. On Friday we started with a visit to the Dutch Embassy by Rem Koolhaas, the DZ Bank by Frank Gehry, the Sony Centre and the Neue Staatsgalerie near Potsdamer Platz. We continued to the Zendome company and after this we had a free afternoon. Tempelhof was on the program for Saturday morning; which was followed by a visit to the Archtictural Drawning Musuem and AEDES (with an exposition on Mecanoo). And last but not least, we visited the Reichstag on Sunday morning.  It was a great group of people; although we started incomplete, at the end we even had a new groupmember “simba” and we had an amazing time!